Could injuries force Redden back to the Rangers? 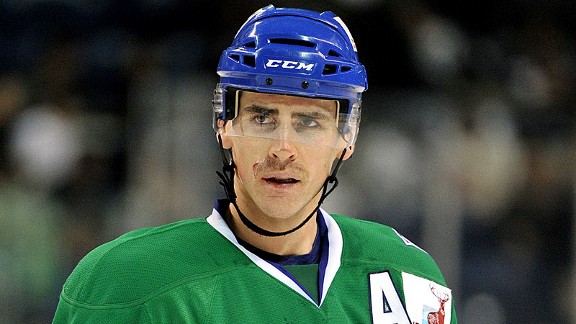 Some may laugh at that title, but there is a slim chance that Wade Redden may wind up back with the Rangers should the Blueshirts be unlucky on the injury front. The Rangers have six defensemen signed, not including Michael Del Zotto or Matt Gilroy (also not including Mike Sauer, who is done for the year). Down in Connecticut, the Rangers have three players that could be used as a call up: Sean Collins, Logan Pyett, and Redden.

Now let’s just be direct and say that this is a very slim possibility. The Rangers would have to suffer a large amount of injuries to their blue line before Redden even becomes a possibility. It’s safe to assume the Rangers would have to burn through their current NHL reserves in Gilroy, Steve Eminger, and Stu Bickel before they begin calling players up. It would take three injuries for the Rangers to require a call up.

Once the Rangers require a call up, it is most likely that Collins or Pyett would be the first call up. They are cheaper than Redden, in the sense that Redden’s full $6.5 million cap hit isn’t with the Rangers when he is in the AHL. Only $5.6 million counts against the cap ($900,000 does not count per the new CBA). For all intents and purposes, Redden comes with a $900,000 cap hit this season, while Pyett and Collins come with just $600,000 cap hits.

Of course, there is always the possibility that these two aren’t available due to their own injuries in the AHL. It’s not exactly impossible, but it’s not exactly probable either.

The organization as a whole would need a perfect storm of injuries for Redden to be a real possibility. By the count in this post, they would need both Pyett and Collins to be injured in the AHL, and then need three additional injuries at the NHL level. This of course does not account for any possible free agents that the organization may sign as a result of these injuries.

Three injuries at the NHL level is very possible, as the Rangers went through that last year. The Rangers, already without Marc Staal, lost Mike Sauer, Steve Eminger, and Jeff Woywitka in the span of two weeks in December. It is the reason why Stu Bickel is now with the Rangers.

Even though more than 85% of Redden’s salary is on the books for the Rangers this year, it would take an astronomical situation for the Rangers to actually dress Redden for an NHL game. Should the injuries mount, it’s more likely that the Rangers would go the free agent route than call up Redden.

I hear that some of these players might have a case if they were to file for back injuries, a friend recommended I look into Ryan Bisher Ryan & Simons if I wanted to find out more about how it might work in a court of law for these players. My friend asked them out of curiosity and they were happy to help. There are loads of law firms who are happy to help people who are in a situation that was caused by somebody else. If you have a suffered a personal injury through no fault of your own then you could check out something like this Cain Law Office to help you get the compensation that you deserve. It all depends on how serious your injury is though, however, if your injury leads to a disruption in your life (e.g. you cannot work), then it is definitely worthwhile filing a lawsuit.