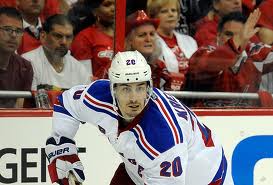 Does Kreider deserve to make the opening night roster?

I’m writing a musings article. That can only mean one thing: The lockout is over. Who else thought the Gary Bettman ‘apology’ fell on deaf ears? Show of hands? Thought so. On to the musings.

TSN had an article earlier this week titled: “Leafs stand to benefit from new CBA”. Of course, this is presumptive from TSN. When you’re a franchise that’s been mismanaged for more than a decade, it’s dangerous to assume anything. More on that later.

Should we expect quick movement on the Del Zotto contract front?

I dislike uninformed journalism. This week THN’s Adam Proteau discussed the Rangers apparent future cap issues in part because of Wade Redden. He mentions cap commitments next year relating to Redden, but fails to acknowledge that a buyout after this season will mean Redden is gone after this year at the latest. He doesn’t note Drury’s cap hit coming off either, while several other cap ‘issues’ should also resolve themselves. The Rangers will of course need to carefully manage their cap, but it’s nowhere near as precarious as made out.

TSN had a poll on their website about the Rangers and Rick Nash, asking whether the acquisition of Nash pushes the Rangers to a cup win, over 65 percent of voters said it did. Let’s hope they were right. The Rangers on paper have certainly improved in the skill stakes.

My first prediction of the season: The East will be a three horse race for the top seed: Pens, Rangers and Caps. The Capitals could benefit from the Rangers and Penguins being in the uber-tough Atlantic, while I don’t see how Ovechkin can have a poorer season than last year.

The Toronto Maple Leafs: The very definition of dysfunctional sports franchise. The offseason was effectively eight months long and they wait until ten days before puck drop to relieve their GM? They let him make all the personnel decisions for this year and then let him go before they see whether he can ice a decent product? This reeks of a power struggle over a Luongo acquisition. Such an old, historic franchise but such a mess.

If Ilya Kovalchuk stays in the KHL, I will have mixed feelings. First I would be full of joy and happiness because the Devils will have taken a severe blow to their season’s ambitions, but then also full of anger and resentment because one of my fantasy teams will have suffered an equally severe blow to its ambitions.

I know many don’t agree with me but I don’t think Chris Kreider deserves a spot on the roster to begin the year. Of course, if he has a great minicamp then maybe he’ll have earned it. Credit to Kreider though, his mindset and approach are spot on. He knows he has to work hard. With a healthy work ethic he’ll get over his lacklustre period suffered in the AHL. We all know he has all the tools.

First question time of the season! Here we go: