What do the Rangers have in Kyle Jean? 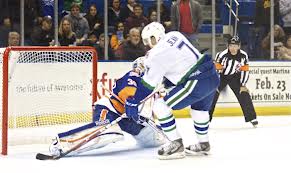 Kyle Jean has popped up on everyone’s radar.

It’s fair to say that when Kyle Jean tried out for the Rangers almost every Ranger fan didn’t have an idea about the young try-out nor were expectations particularly high. After all, try outs come and go in their dozens and rarely does one stick with a club let alone make some noise. So its fair to say that despite a promising pre-season its come as a surprise to many that Jean has exploded into the AHL season with the Whale grabbing 9 points in 7 games while leading several more eagerly anticipated prospects in scoring a long the way.

Prior to making the Whale, Jean played college hockey and while his numbers for the CCHA’s Lake Superior were solid (38 points in 77 games), they were certainly not stand out from the crowd worthy. Indeed, Jean at 22 is not even particularly young for a prospect. So what is there to like about him at first glance? Physically, Jean has great size at 6’3 and 205 lbs and is a left-handed shot. He is also more than willing to put the puck on net at any given opportunity and looks to finish. You can never have enough goal scoring and it’s certainly something the Rangers want more of – hence Mr R. Nash’s acquisition.

Throughout the preseason media folk were impressed by Jean’s effort in camp, his ability in the corners and his knack of coming out of them with the puck on his stick. Jean seems to play an intelligent brand of hockey and so long as he keeps finishing  his reputation will continue to rise. Unlike a veteran like Kris Newbury who despite 10 points in 7 games is a minus player, Jean appears to play responsibly both ends of the ice and seems to impact the play in all situations. He’s already grabbed goals on the powerplay and shorthanded while only Matt Gilroy has taken more shots (26 to Jean’s 25). So, with the stats out-of-the-way, what do the Rangers potentially have in Jean?

Jean has the benefit of the NHL’s lockout in so much that he’s receiving greater exposure than he would have while playing against a better level and breadth of opposition this year; what he can learn this year could be immeasurable and any prolonged form will give hockey starved fans something to talk about. However, is Jean a legitimate prospect or a flash in the pan at the minor pro level?

Only time will tell whether Jean can make the NHL but his start is very promising. He’s clearly not afraid of competing against bigger names for ice time and he has the size that the Rangers crave down the middle. What Jean also is, is another tip of the cap to the Rangers scouting department. The Rangers have done an excellent job in building up the franchise in recent years and Jean is the kind of under the radar find that often can be the difference to successful franchises.

What Jean eventually develops into is in part down to his own play but also in part down to how the pieces fall into place for the Rangers. There are a deep pool of prospects right now vying for very few opportunities on the Rangers and it will take an exceptional, likely extended period of play to force their way in. Guys with pedigree such as Christian Thomas – once highly thought of – are in danger of falling by the wayside and the top six in New York looks set in stone for a long time to come.

Jean can either become AHL depth (not a bad thing, every  club needs depth at the minor pro level), a trade chip – something that every club needs if they want to tool up for a run, a legitimate prospect providing further pressure on the established NHL roster or, eventually, maybe even an NHL player for the Rangers. Of course, this may be the aforementioned flash in the pan hot streak or he may become victim to the Rangers impressive depth at forward and lost in the chasing pack. Above all though, the options right now are endless for Jean and that in part is what makes him such an intriguing prospect to watch out for.