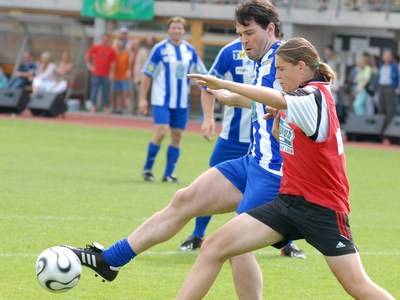 Take a good look at this picture. Those aren’t the legs of a man who slacks or avoids the gym. This is a photo of a man who is serious about being in the best possible shape you can be in. Jagr’s training and conditioning is bar none and it is one of the reasons why he has dominated professional hockey for 20+ years.

As a member of the New York Rangers, Jagr’s ability to create offense off the cycle was beyond elite. Part of what helped create those plays in the OZ was his ability to protect the puck, and a lot of it had to do with his build and conditioning. Whenever I talk to those who have either worked for or covered teams Jagr has played for, I always hear admirable stories about JJ working out at night after playoff games, or at 3am in the morning. The guy just took his workout regimen to another level and it showed.

So what does this have to do with the current Rangers squad?

It’s simple. The Rangers don’t have a player of this ilk. There isn’t any forward on this team that has this same combo of skill, build, and will. It is a void and it should be filled. While I admire the youthful core the front office has put together, I do think our top-end players are bit undersized for long-term postseason success.

Don’t get me wrong. I love Carl Hagelin, Ryan Callahan, Derek Stepan, Brad Richards, Artem Anisimov and yes, even Marian Gaborik. However, forget what their generous roster listings say, none of these guys have the combination I speak of. Chris Kreider has potential, but even he isn’t on that level yet either (hopefully soon).

Throughout the playoffs, we were easily shutdown against lesser known big boys like Danius Zubrus, Jason Chimera, and Chris Neil. If the Rangers are going to survive the first few months of the season without their #1 scorer, it would behoove us to add someone to this top 6 that can take a hit from the Chimera’s of the world and still be able to finish a play. It’s a move we have to look into making, even if it means sacrificing a little youth in the process.

So forget free agency being the answer to everybody’s prayers. Sather needs to get creative and see what it would take to land a Ryan Clowe, a Bobby Ryan, or a Jordan Staal type player. Oh and forget Zach Parise. He isn’t the answer.