By now hopefully all of you have read our hockey systems page and have a basic understanding of the game from an x’s and o’s perspective. Today we are going to turn it up a notch and get into advanced hockey tactics.

In order to comprehend complex forechecking schemes, you have to throw away the notion of forwards being referred to as centers, leftwings, and rightwings. In today’s sophisticated systems, coaches label their players by their distance from the puck.

The reasoning is simple. Every forward is going to find themselves as F1, F2, or F3 at some point during the game. And when they find themselves in one of these roles, they better know what they should be doing or a breakdown will ensue.

I’ve been noticing lately that Torts & Sullivan have our boys executing a new forechecking tactic, which I believe is helping our penalty kill create some offense. Specifically, it’s called a T-Forecheck. 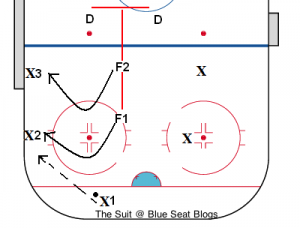 The T-Forecheck is an aggressive (1-1-2) forecheck designed to disrupt the opposing team’s breakout on the power play. The general idea is that F1 will explode off the pass and try to force a turnover along the boards against X2, who will likely be receiving the puck in motion from X1.

F1 tends to be Brian Boyle, as he is very adept at angling the puck carrier (the curved black lines) and making that crucial hit along the boards. F2 (typically Dubi or Prust) has to read the play and either make the hit on X3 or make the transition towards the slot for a play on net.

Here we see a snapshot of the Rangers executing this forecheck against Buffalo’s PP. I know, much prettier than my drawing. And of course the below video shows the result.