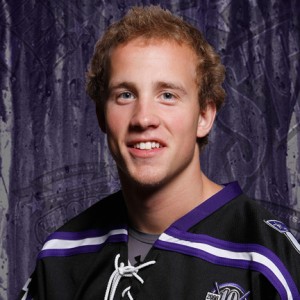 The way the Rangers are situated now, and project out to end the season, they are looking at at 15-20 pick. This seems to be the consistent spot for the Rangers, they’ve picked here for a few years now. Last year, I was extremely focused on Scott Glennie, who was initially ranked #19 in the ISS Top 30, but wound up going #8 overall. This year, there is another player like Glennie, who from what I’ve read, encompasses something the Rangers sorely need: a speedy, goal scoring winger. That player in the 2010 draft is Jaden Schwartz.

Schwartz isn’t tall, but he is built, at 5’10 193 lbs. Currently playing for the Tri-City Storm of the USHL, Schwartz is playing at almost a point and a half per game pace, putting up a line of 25-47-72 in 47 games. His offensive talent has turned heads at the NHL scouting level, and his ability to create offense from nothing is one of his greatest strengths. His skating ability makes up for his size, as opponents find him to be elusive with the puck. He may be 5’10, but he plays like he is 6’1. His hockey intelligence is second to none at his level, which leads to a great defensive game and penalty kill time in the USHL. His teammates praise his skating, hands, intelligence, and most importantly, his character. They describe him as a class act who is fun to be around.

If there is one worry about Schwartz, it’s that he is small. He will not wind up as a third-fourth line guy. If he doesn’t crack the top-six on an NHL club, he will be a bust. The good thing for him is that a lot of current NHL stars are under 6’0, including Sidney Crosby. His size will see him drop in the draft, not to the third round like Ryan Bourque, but the Rangers may luck out and see him fall to the mid-late first round.

I think he’s worth the “risk”.