Marc Everson of the NY Post writes that the clock is ticking on the Rangers “bid” for RFA Phil Kessel. This is probably a moot point, but the Rangers lost all chances at Kessel when they traded their third-round pick next year for Brian Boyle. I, along with a ton of Ranger fans, was completely unaware that the Rangers were even in the bidding for the winger. But that doesn’t really matter right now.

There is simply not enough cap space available, for either team, to make a deal. The Rangers would have to send salary to Boston to make the deal happen on their end. The Bruins currently sit $600k OVER the cap, and that’s without Kessel on the roster at his $5 million demand.

Should the Rangers package, say Brandon Dubinsky, a pick, and a prospect for Kessel, and sign him to that $5 million contract, the Rangers, even with just 20 players on the roster, will sit $300k over the cap. The Bruins, of course, will still be $600k over the cap, but will need to sign Dubinsky, not Kessel. Same problem, different player. 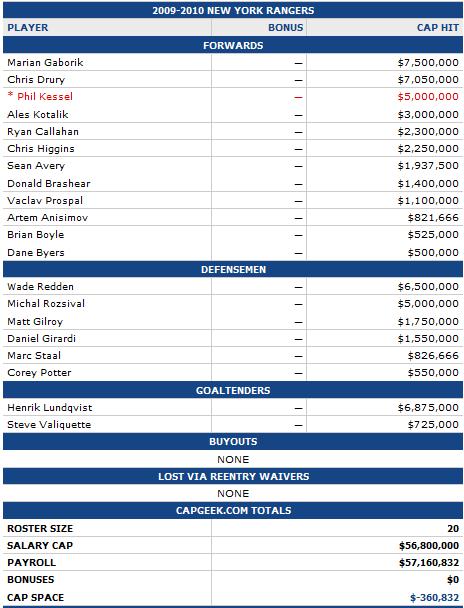 There are always over variables involved, of course. It’s only $300k, and Kessel might accept something in the $4.5 million salary range on a shorter term contract. That’s a very realistic possibility, getting Kessel for say, two years and $9 million. It definitely works for this season. But there are current and future factors that GM Glen Sather need to consider, mainly Marc Staal and Dan Girardi.

Both Staal and Girardi will be RFAs again at the end of the 2009-2010 season. Both will be due raises, probably to the tune of $2 million for Girardi and $2.5 million for Staal. This is important to note because the Rangers don’t have any major money coming off the books (unless you count Chris Higgins and Vinny Prospal), and the salary cap will almost certainly go down for the 2010-2011 season.

Another issue to consider is that Kessel, despite what anyone may write, is NOT a center. He is a very solid two-way winger with one of the best shots in the game. But he is not a center. The Rangers biggest need right now is a top-line center, in which they may have in Dubinsky, assuming he signs sometime before December.

The final issue, which is probably bigger than most people will realize, is that the Rangers would have just 20 players under contract. We saw what happened last season with no blue liners in the press box to pressure the starters (see: Kalinin, Dmitri). Competition breeds improvement. Plus, what happens if someone gets hurt?

The Rangers are in a very rare position where they have the cap room to absorb the raises due next year, a balance of youth and experience, and four cornerstones that they can build a franchise around (Staal, Dubinsky, Ryan Callahan and Henrik Lundqvist). Yes, acquiring Kessel would be an upgrade for this season, but you also have to plan for the future.

Devils Advocate: As I was writing this, I started playing Devils Advocate with myself. While I believe a trade for Kessel would be a step forward, and then a step backward due to the Staal/Girardi situation, I began to think about all those defense prospects sitting in Hartford. I also recall a post I made about Dan Girardi becoming expendable. If the Rangers deal for Kessel, you can probably kiss Dan Girardi good bye. With Bobby Sanguinetti, Michael Del Zotto, and Ryan McDonagh waiting in the wings, roster space needs to be made available.

That can be one way to deal with Girardi’s impending raise, just cut him loose. Depending on the cap ceiling, it may work out for the Rangers.