With the Rangers bowing out in the first round, and being a 7 seed, it is a fair assumption that they will have a late teens pick, probably somewhere from 17-20. They won’t have a shot at the top picks, so naturally, you have to look a little deeper into the draft to see who might potentially fall to the to those picks.

As these playoffs have indicated, the NHL is shifting back to a speed and goal scoring game. Long gone are the clutch and grab teams that win Stanley Cups. Young, speedy teams with goal scoring ability up and down the lineup are the ones that are progressing through the playoffs. As the ISS Top 30 shows us, the projected first rounders are just that, speedy players with a natural goal scoring ability.

The Rangers have been plagued by ineffective first round picks, whether it is Hugh Jessiman, the only 2003 first rounder to never play in the NHL, or Al Montoya, who was passed on the Ranger depth chart by Mika Wiikman, and thus shipped to Phoenix, or Lauri Korpikoski, who has yet to show the Rangers why they traded up for him in 2004. In fact, the only first rounder to make a difference on the Rangers in the past decade is Marc Staal. Needless to say, the first round is crucial to the Rangers, as they need to rebuild their offensive depth after the tragic passing of Alexei Cherepanov.

Seeing the logjam at center, and the myriad of solid prospects on the blue line, the Rangers most glaring need will be a goal scoring winger with speed. Here are a few that are first round projections that the Rangers should take a flier on. 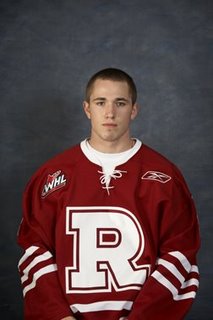 Landon Ferraro, WHL Red Deer
One of the first players that come to mind that is projected to be a mid-first rounder is Landon Ferraro of the WHL’s Red Deer. His +/- is a bit misleading, as he’s a combined -47 in his two full seasons in the WHL, but that probably has a lot to do with his team being bad (250 GA in 72 games). He had 37 goals in 68 games last season, despite no one on his team having more than 30 assists. In my humble opinion, I think that +/- is inflated. His name might sound a little familiar, as it should, he is the son of Ray Ferraro.

Ferraro is a bit undersized, at 5’11 and 165 lbs, but he plays bigger than his size, which is a rare trait to have. If he were 20-30 pounds heavier, he would be in the top 10 picks this year, there’s no doubt about it. His speed and hockey IQ are his best weapons. He finds himself in places where most players aren’t, and this leads to scoring chances, mainly the front of the net. Sometimes he gets there just a step ahead of the play, which is either due to inexperience, or bad teammates (see above). Both are easily fixed, and shouldn’t really worry anyone.

Ferraro, who is easily the best player on a bad team, shows a natural goal scoring ability, having accounted for 22% of his teams goals this year. It would have been much more, but again, his lack of talented teammates who can get him the puck in the slot affected his totals. He has played on both the PP and the PK for Red Deer, and is learning the defensive aspect of the game to help round out his game. He is not afraid to go into the corner and dig for pucks, but can be taken off the puck occasionally due to his size. If I were to compare him to a Ranger, it would be Ryan Callahan, but with a better, and more natural, goal scoring ability. I would be happy if he fell to the Rangers at 17-20. 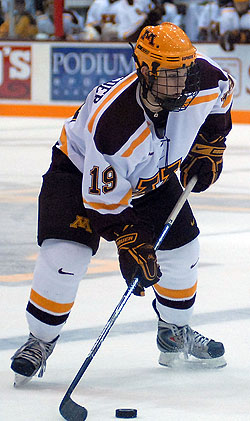 Jordan Schroeder, University of Minnesota
Another player that catches my attention is Jordan Schroeder, of the University of Minnesota. Schroeder, like Ferraro, is undersized (5’9 and 180 lbs), but has a natural offensive ability, and a completeness that is unrivaled by any of the other NCAA prospects. He makes up for his lack of size with being strong on his skates, and is tough to knock off the puck. He showcases tremendous vision on the ice, and has an equal poise on the ice. He, again like Ferraro, has amazing speed that is used to his advantage. However, unlike Ferraro, Schroeder is more of the playmaking variety. In his first season with the Golden Gophers, he put up 13-32-43 in just 35 games. But don’t let his playmaking abilities mislead you, as he still had 13 goals last season with Minnesota, and put up another 12 in 31 games with the U-18 National Team. Schroeder compares himself to Pierre-Marc Bouchard, of the Minnesota Wild, stating his speed and playmaking abilities as strong comparisons to his game.

It is very unlikely that Schroeder will fall to the Rangers, as he is projected to go in the first 15 picks, but I wouldn’t be all that surprised if the Rangers traded up to get him. 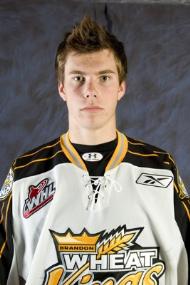 Scott Glennie, WHL Brandon Wheat Kings
The final player that I’ve been following, and possible the most skilled of the trio, is Scott Glennie. Glennie is a bit of a hybrid of Ferraro and Schroeder. He has blazing speed, he may be faster than both Ferraro and Schroeder, and has an offensive upside that is projected to be better than linemate Brayden Schenn. Last season with Brandon, he put up 28-42-70 in just 55 games. He is bigger than both Ferraro and Schroeder too, at 6’1 180 lbs. As with most speedy scoring forwards, he lacks a bit on the defensive side of the game, as well as the physical side. Glennie has rocketed up the draft boards this season with his superb play.

While Ferraro and Schroeder are more well-rounded than Glennie, Glennie showcases a skill that was surpasses the previous two. Glennie’s best weapon, as touched upon before, is his speed. He is lightning-quick, with an overdrive that is matched by no one on the junior level. Combine that with his offensive and puck handling abilities, and he becomes an offensive force.

Glennie is currently #19 (with Ferraro at #15 and Schroeder at #11) on the ISS top 30, but it is safe to assume he will be a top 15 pick as well. Should he miraculously fall to the Rangers, Sather should pounce on him. I will be happy with any of the three players profiled, but Glennie is clearly the gem of this group.