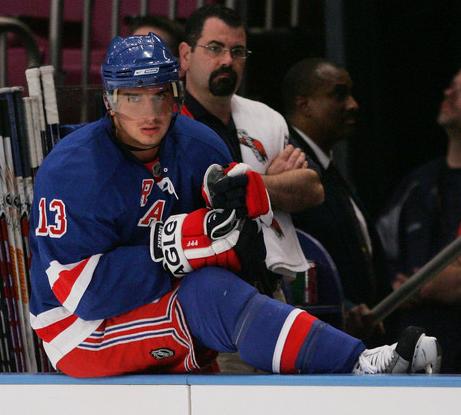 One of the biggest issues facing GM Glen Sather this coming offseason is the contract status of stud winger Nikolai Zherdev. The 24 year old is in the final year of the three year, $7.5M deal he signed while with Columbus and will be a restricted free agent after the season, and we already know that the team is trying to lock him up long-term. There is some concern that he could bolt for the KHL, since teams in the Russian league can offer ginormous amounts of money in an effort to steal away players from the NHL (see Malkin, Evgeni).

We’ve seen some of the flakiness that reported plagued Zherdev with the Blue Jackets, as he was visibly pressing and frustrated at times this season. Even though he shows outstanding hands, the goal scoring hasn’t been there as hoped this year (he just snapped a 14 game goal drought). He has done a better job in his own zone, tying for the team lead with a +6. Even though he can enigmatic, he leads the team in scoring and his talent is clearly worth keeping around.

What I want to do is try to get a feel for what kind of contract offer Zherdev can expect from the Rangers after the season. I did this by finding similar aged players who signed long term deals after posting statistically similar seasons to Zherdev. I considered the three seasons before each player signed their deal, roughly approximating an entry-level deal. Granted, this isn’t the most scientific method in the world, but if nothing else it at least gives us a ballpark figure.

* stats for Year 3 are his projected totals for this season, which I got off his ESPN Player Page.

First thought: holy cow did the Kings get a helluva deal on Dustin Brown. Second though, Zherdev fits right in with these players. He lags a little bit in the goal scoring department in his “contract year,” but the point totals are right there. Of course there’s a chance that Zherdev gets hot over the season’s final two months and eclipses that projection, but there’s always a chance he underperforms it too.

So does six years and $24M sound fair? Yeah, it does. Maybe five years, $20M sounds a little more reasonable, but that sixth year might be what it takes to keep him from heading back to the Motherland. I’ll leave contract details like annual payout (a backloaded deal would ease the cap burden) and no-movement protection (no, please) to the professionals. The framework of a five or six year deal with an average annual value around $4M does seem to make sense for both parties, however.

What do you think, too much, too little?