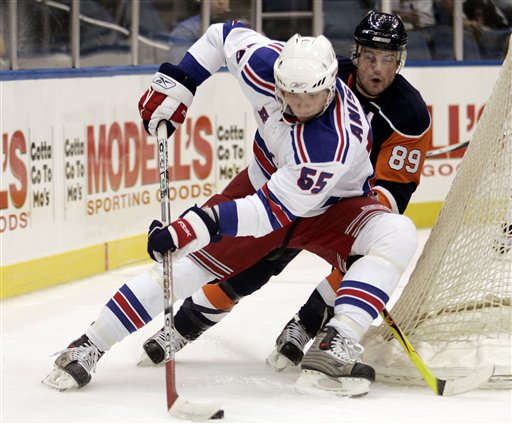 Artem Anisimov was drafted by the Rangers in the 2nd round (54th overall) in the 2006 draft, and is currently ranked the #1 prospect in the Rangers organization. He is just 20 years old, and stand at 6’3″, with some filling out to do. When all is said and done, he will probably reach 6’3″, 220 lbs.

Anisimov is projected by many to be the Rangers #1 or #2 center in a few years, and he is the most NHL ready prospect the Rangers have in the system. He is currently averaging more than a point a game (20/26/46 in 44 games) in Hartford, and is one of the few Hartford players that is on the positive side of +/-. He has superb hands that make him an excellent passer with a deceptively quick shot. Playing in Hartford, he has developed into a very strong two-way center.

He is not the speediest of players, but centers rarely are. Don’t mistake that for Anisimov being slow though, he is a great skater for someone his size. His sizs and strength make him difficult to move off the puck, and his quick hands make him adept at handling the puck while in traffic.

A big center with great hands that can shoot, pass, and play defense is a rarity in the NHL. Anisimov’s lanky frame hurts him in the faceoff circle a little bit, but as he grows, he should become better in that category. I want to compare him to Mats Sundin in terms of playing style and size, but it may be a little too early for that. His future on this team is a top 6 forward, possibly the #1 center.